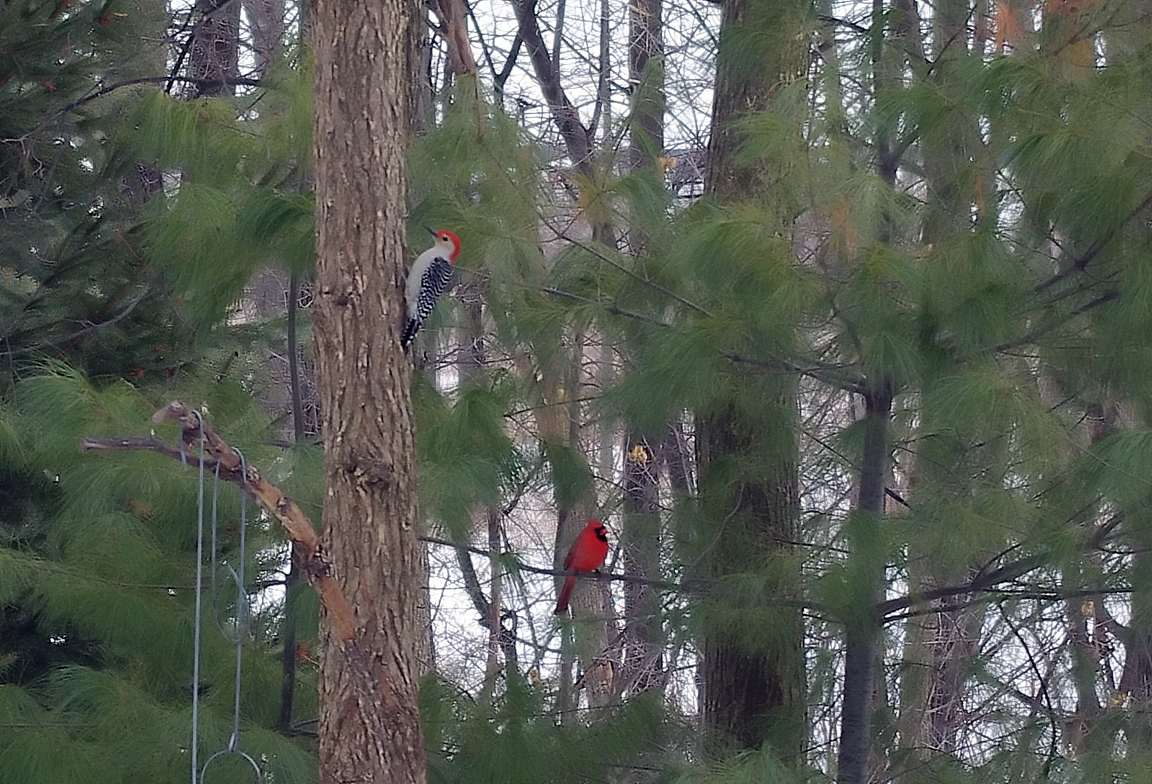 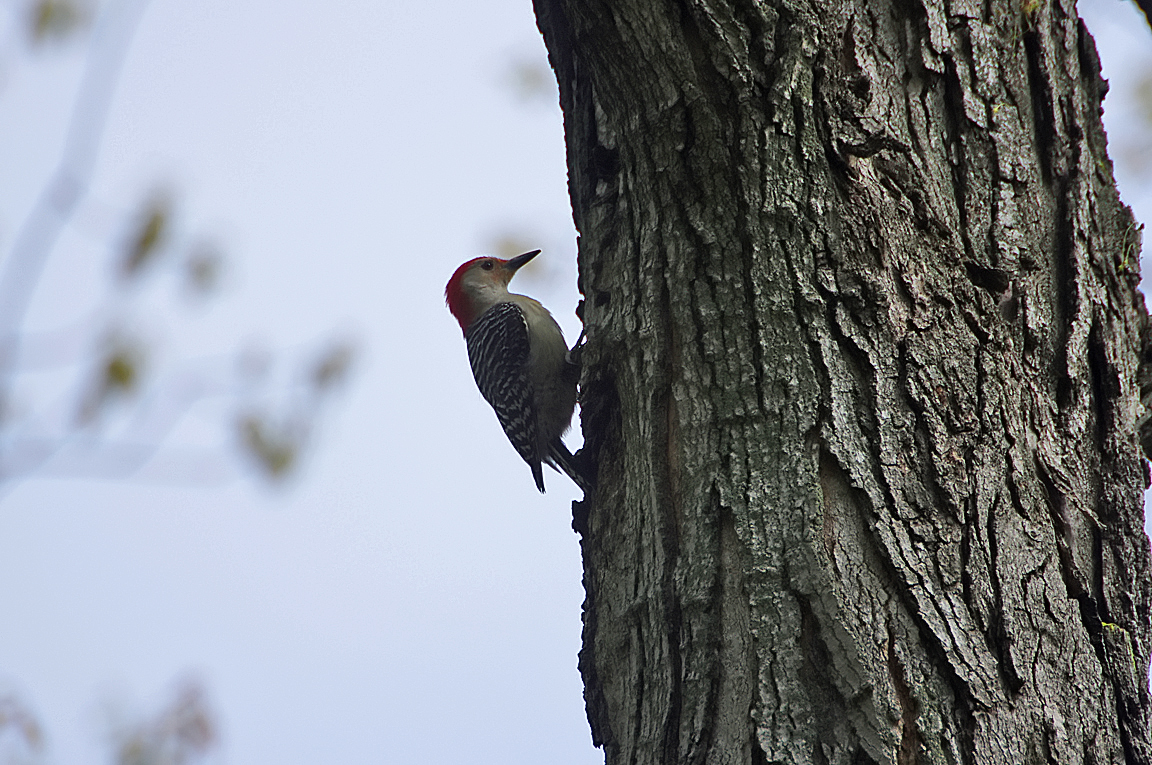 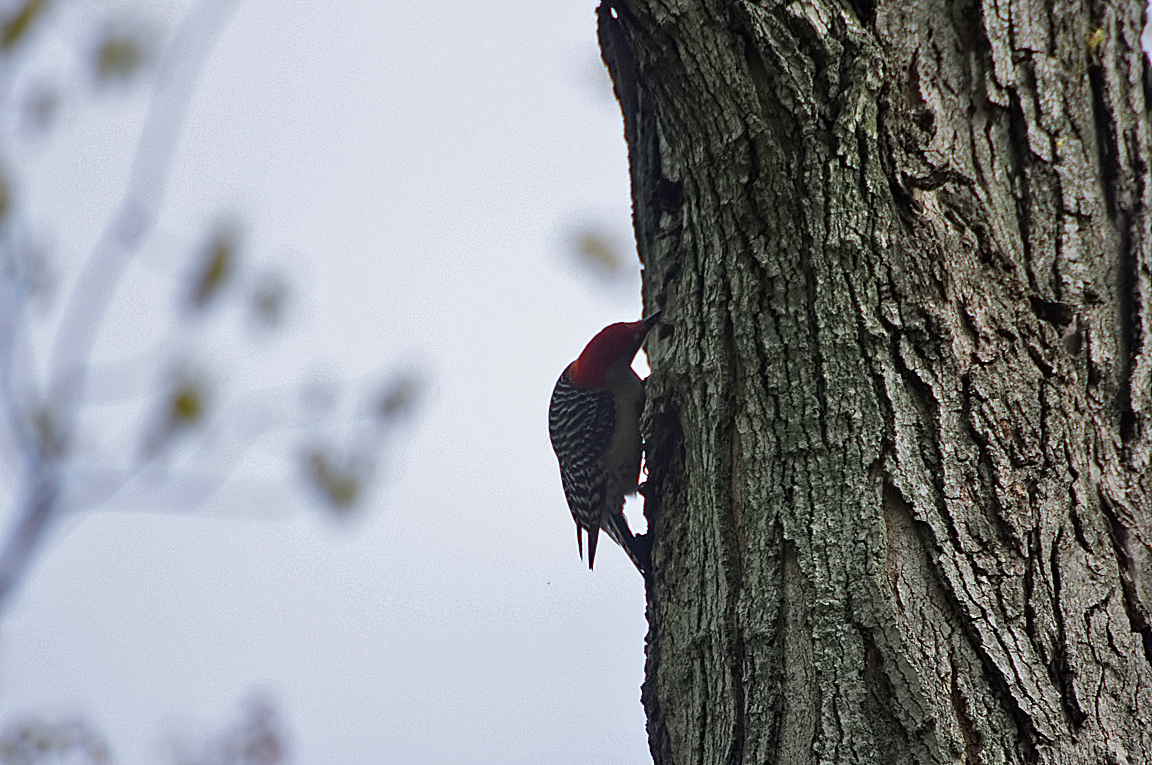 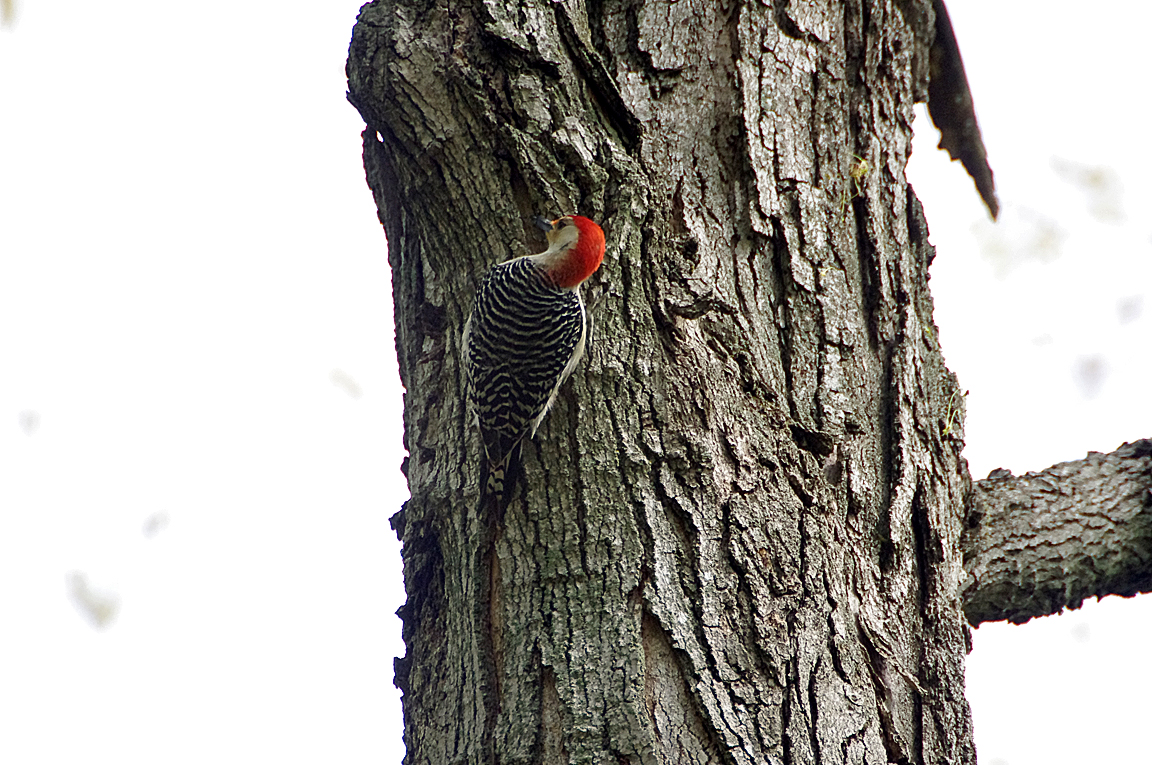 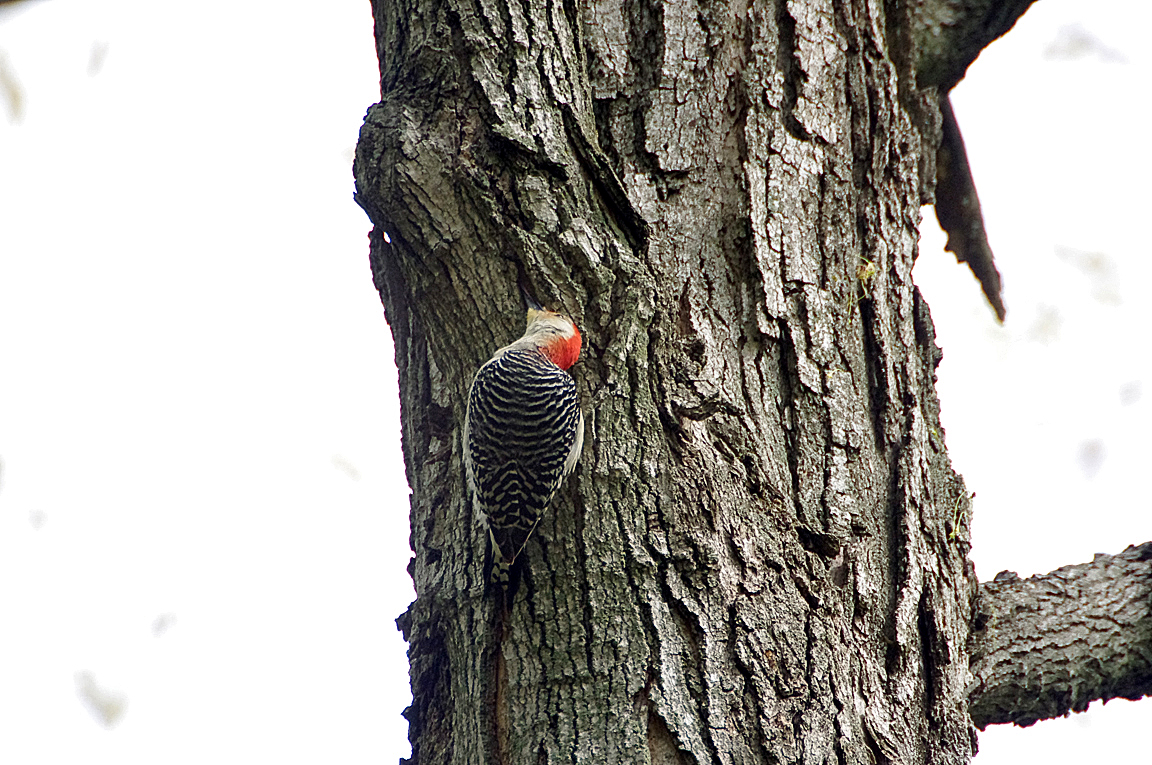 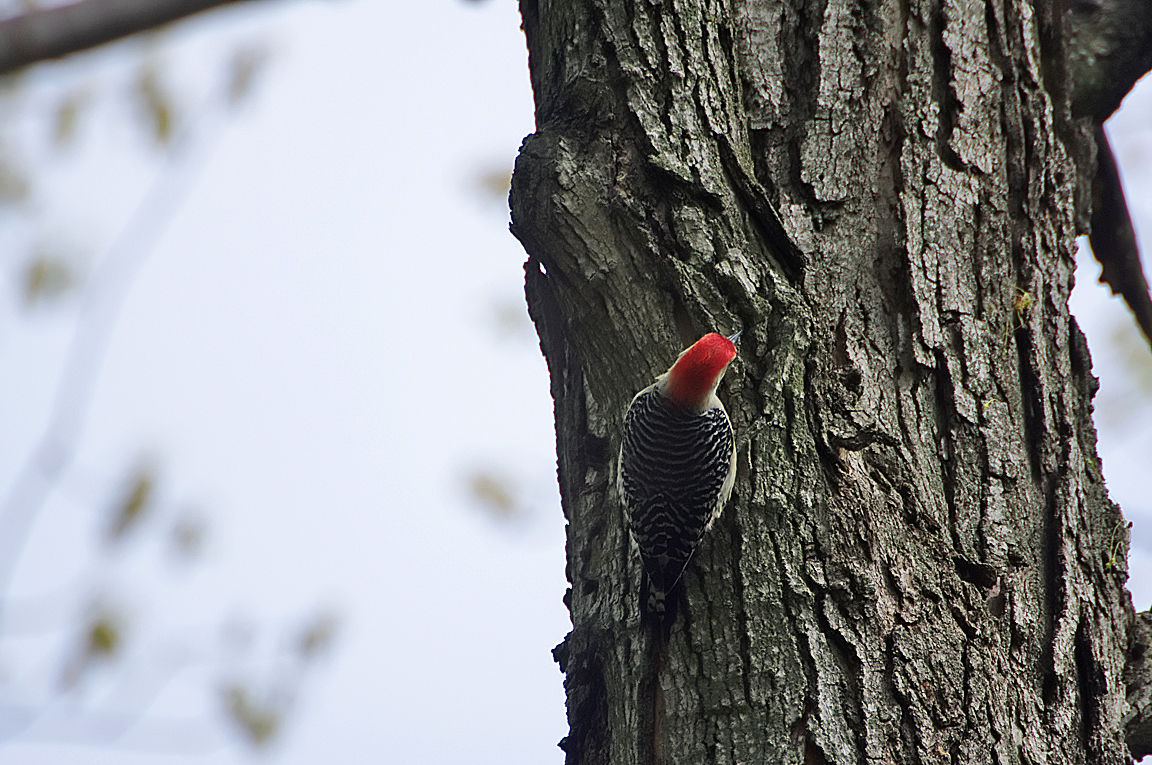 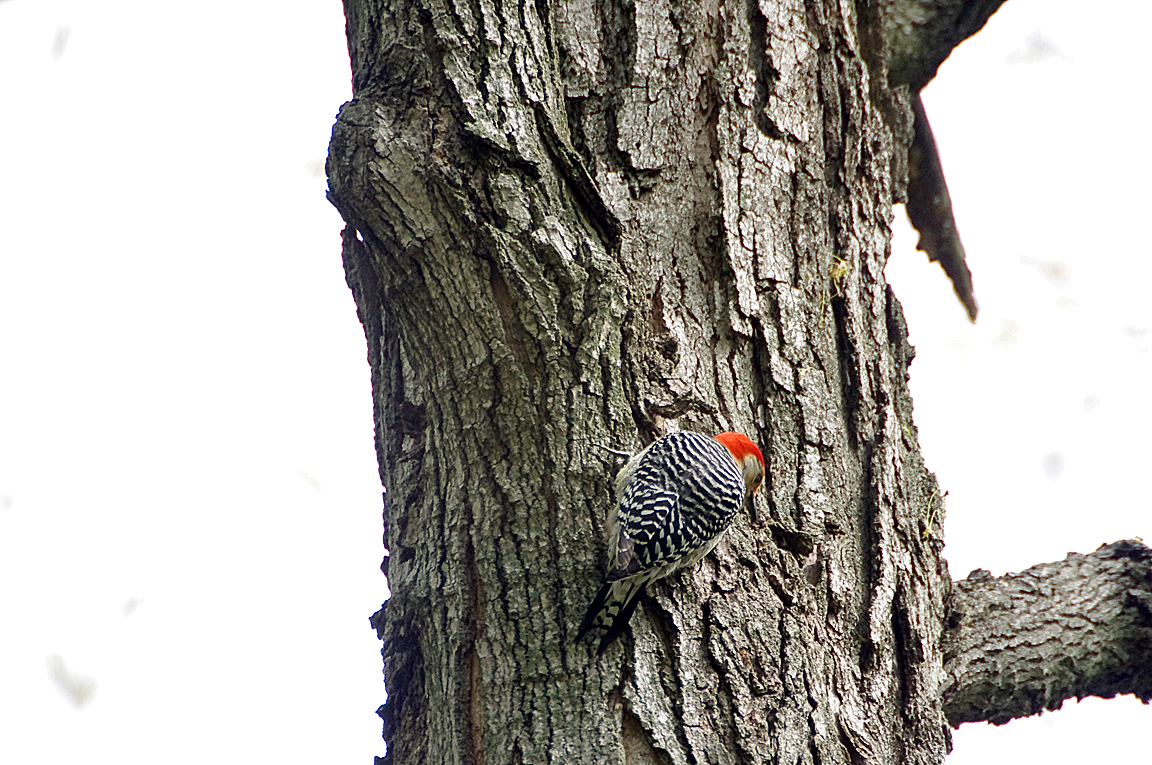 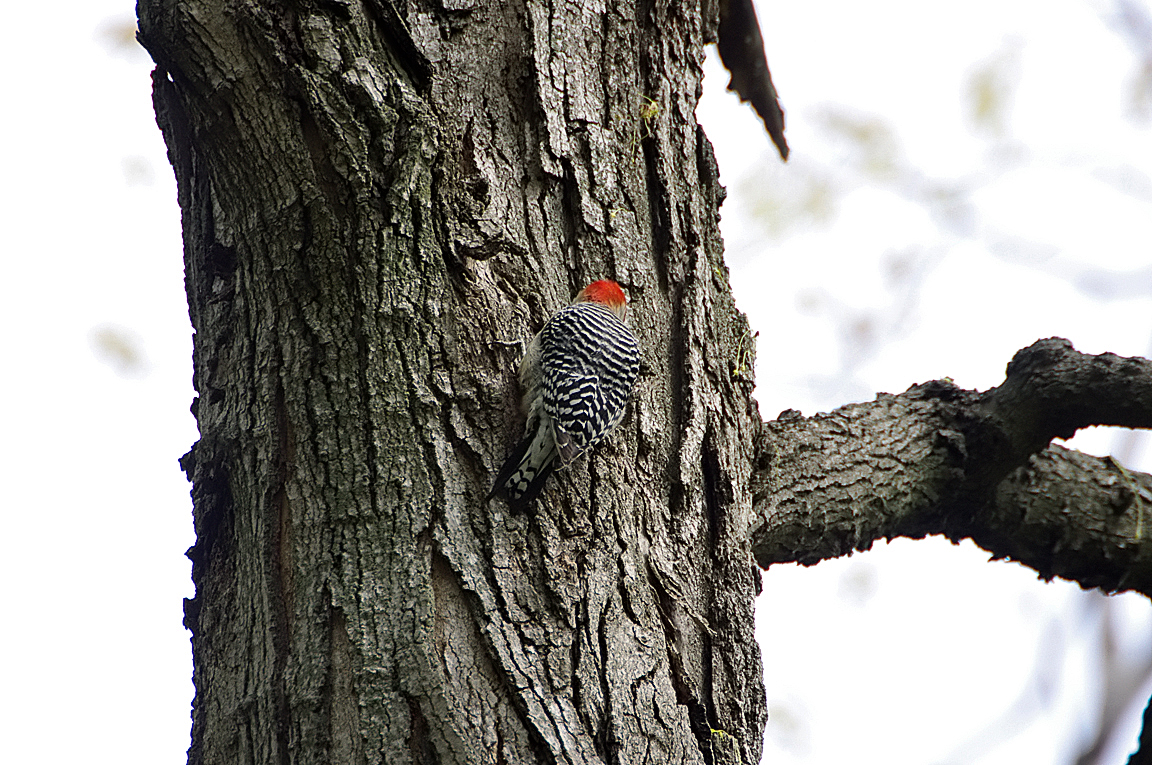 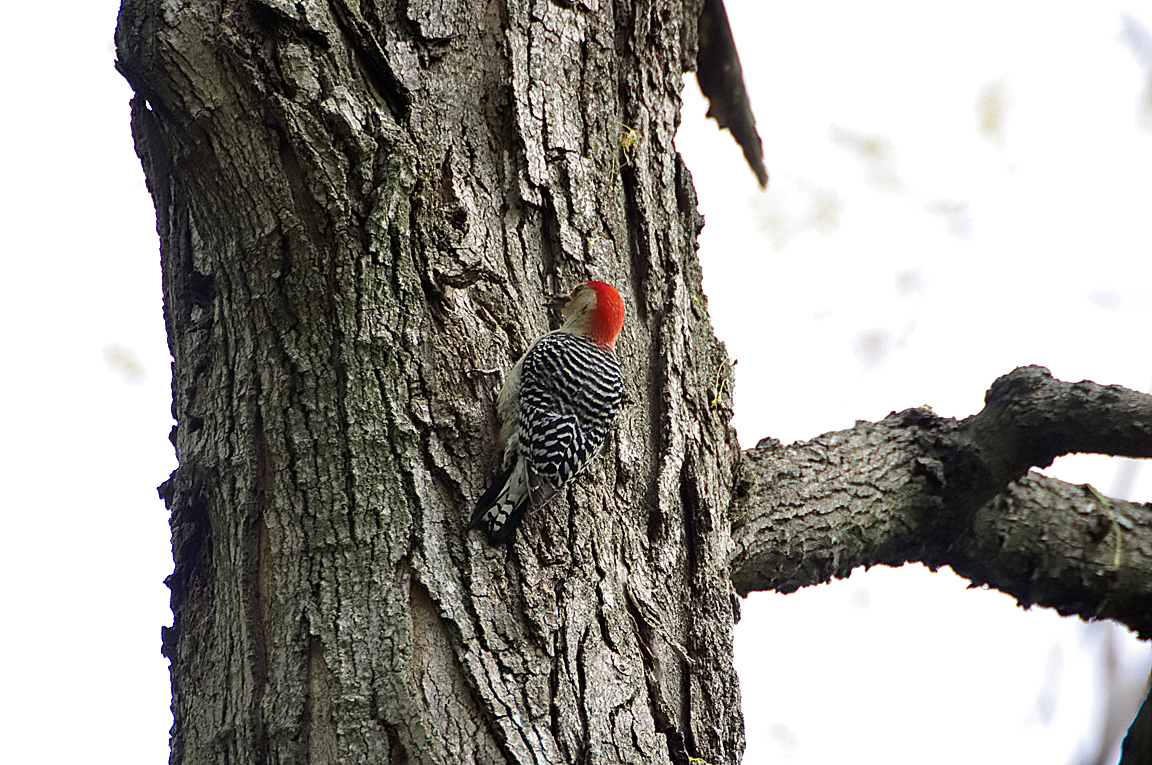 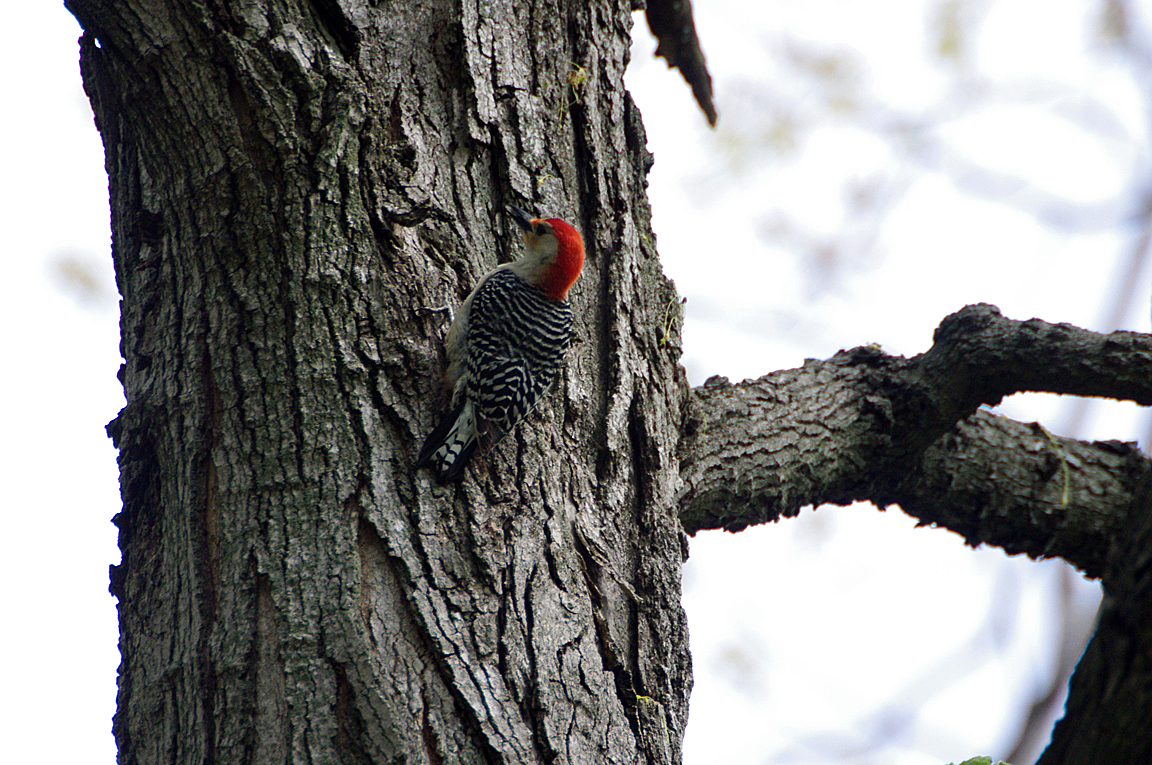 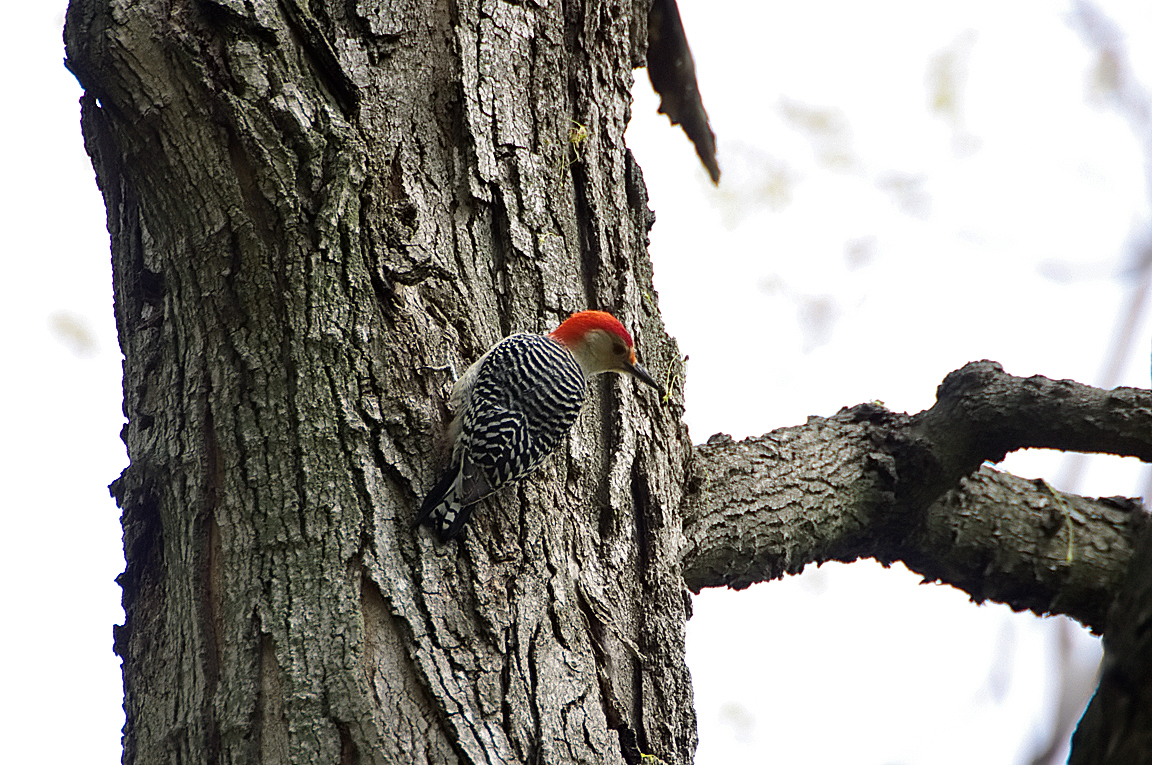 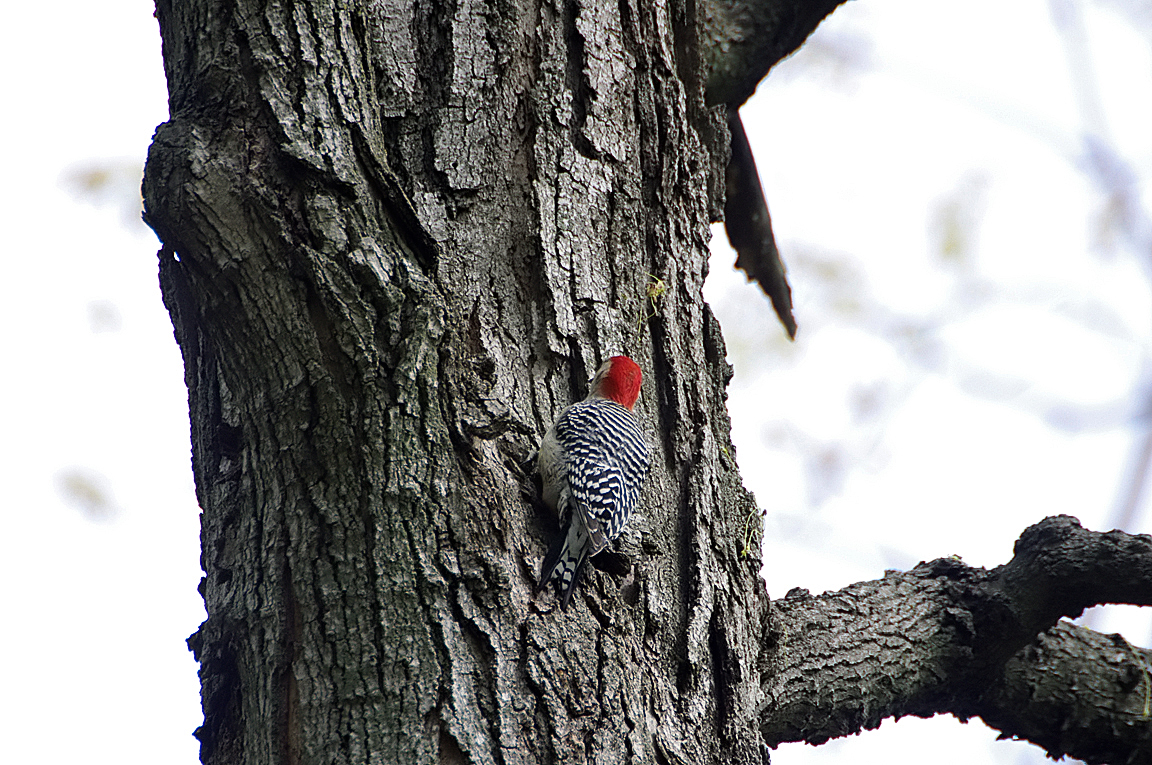 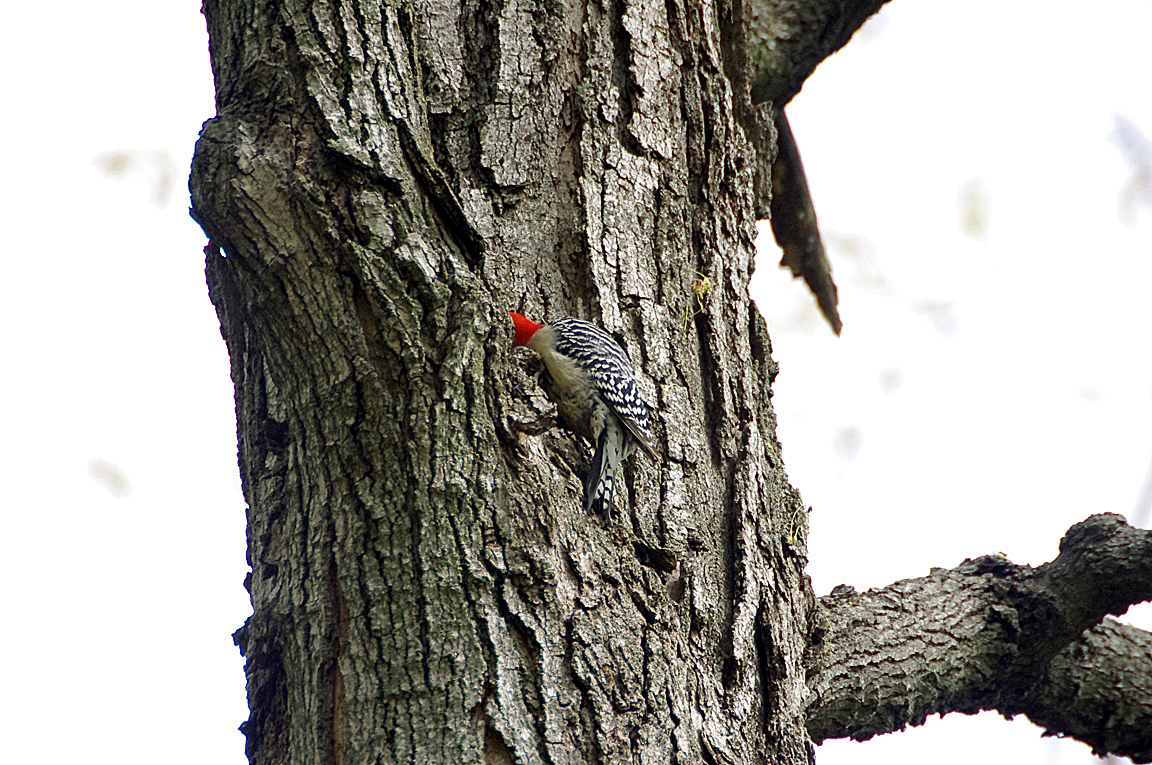 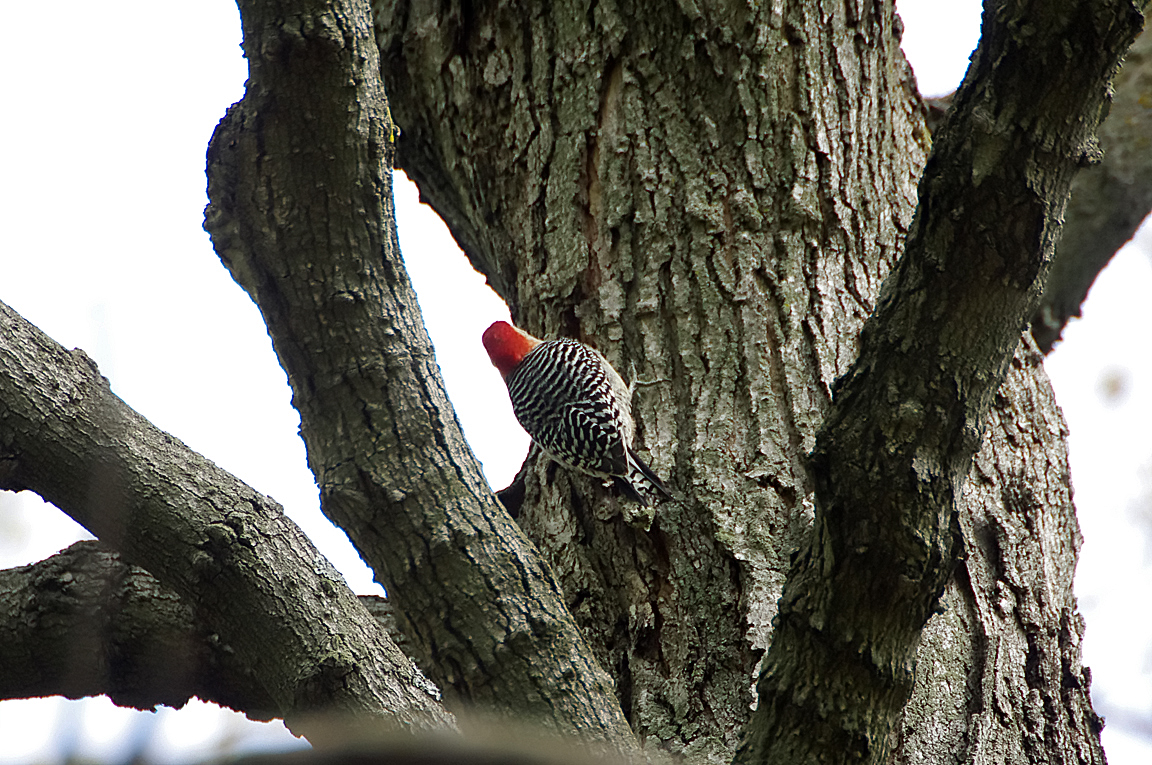 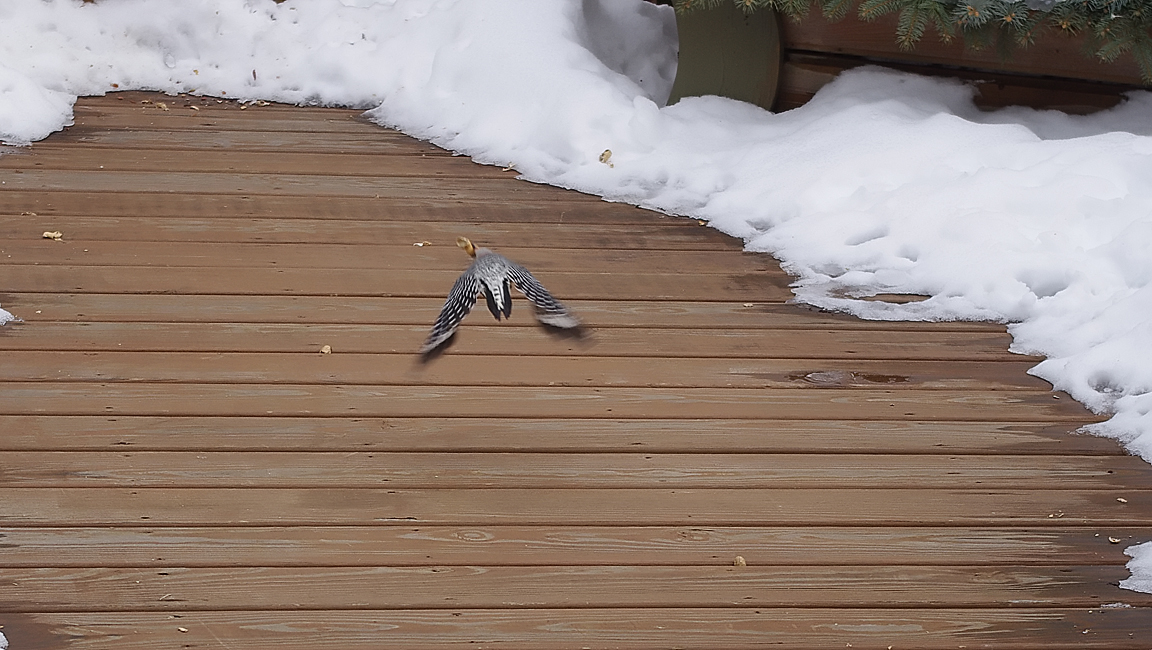 The Red-bellied Woodpeckers are pale, medium-sized woodpeckers common in forests of the East. Their strikingly barred backs and gleaming red caps make them an unforgettable sight - just resist the temptation to call it a Red-headed Woodpecker, a somewhat rarer species that's mostly black on the back with big white wing patches. Learn the Red-bellied's rolling call and you'll notice these birds everywhere.

You may sometimes see Red-bellied Woodpeckers wedge large nuts into bark crevices, then whack them into manageable pieces using their beaks. They also use cracks in trees and fence posts to store food for later in the year, a habit it shares with other woodpeckers in its genus. Starling. In some areas, half of all Red-bellied Woodpecker nesting cavities are taken over by starlings.

For birds that nest in cavities, nest holes are precious turf. Red-bellied Woodpeckers have been known to take over the nests of other birds, including the much smaller (and endangered) Red-cockaded Woodpecker. But more often they're victims to the aggressive European Starling. As many as half of all Red-bellied Woodpecker nests in some areas get invaded by starlings.

You may occasionally see a Red-bellied Woodpecker flying quickly and erratically through the forest, abruptly changing direction, alighting for an instant and immediately taking off again, keeping up a quick chatter of calls. Scientists categorize this odd behavior as a type of play that probably helps young birds practice the evasive action they may one day need resources in one area.

A Red-bellied Woodpecker can stick out its tongue nearly 2 inches past the end of its beak. The tip is barbed and the bird's spit is sticky, making it easier to snatch prey from deep crevices. Males have longer, wider-tipped tongues than females, possibly allowing a breeding pair to forage in slightly different places on their territory and maximize their use of available food.

A sleek, round-headed woodpecker, about the same size as a Hairy Woodpecker but without the blocky outlines.

Often appears pale overall, even the boldly black-and-white striped back, with flashing red cap and nape. Look for white patches near the wingtips as this bird flies.

Similar to adult except there is no red crown or nape 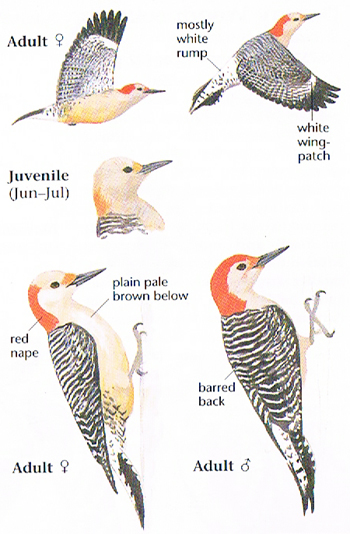